This blog post gives insights on how we build node-moving-things-tracker, a simple algorithm that run on top of any object detection algorithms output (such as YOLO, Detectron …) to track objects persistently across multiple frames. 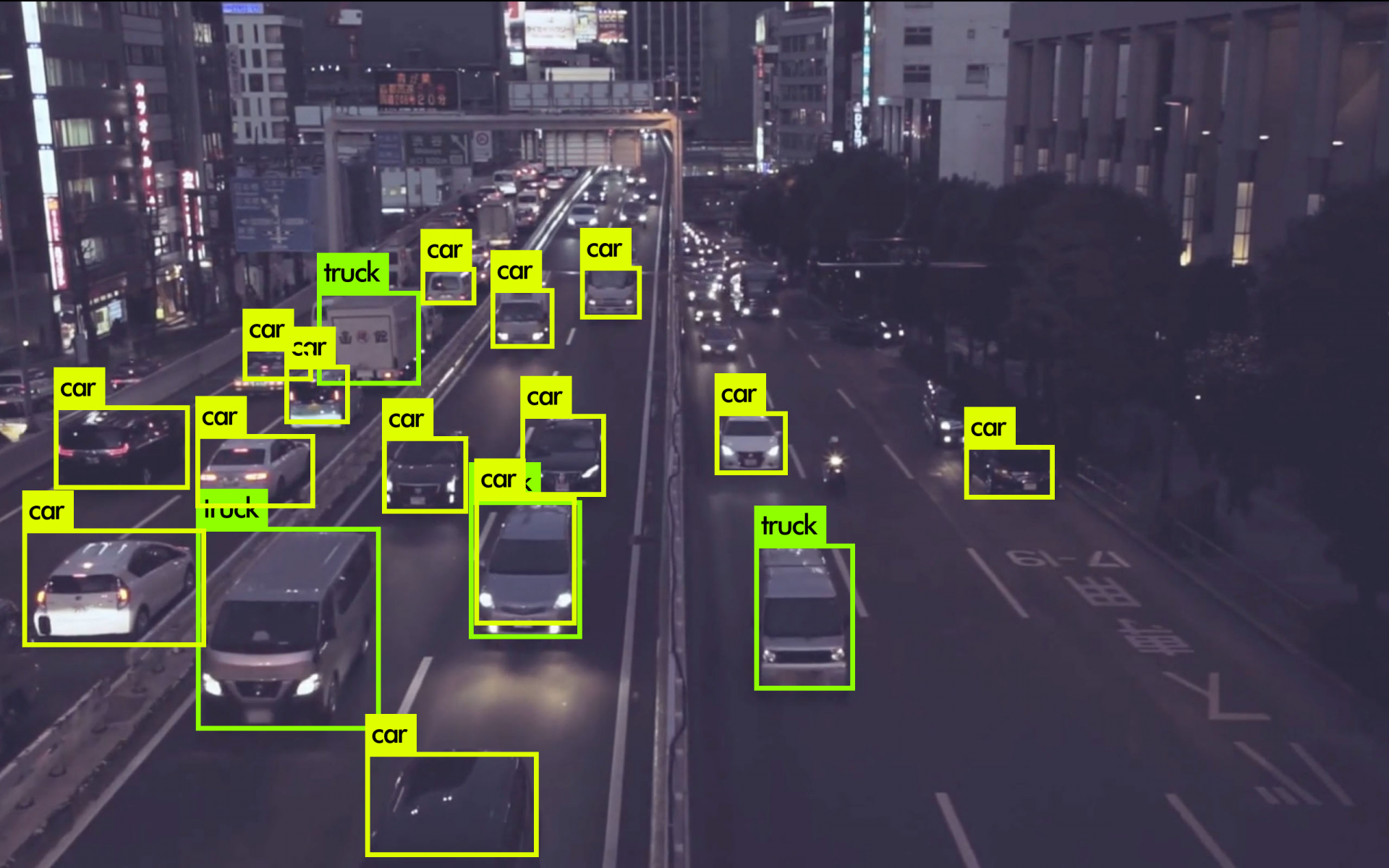 The following blog post gives insights on how we build node-moving-things-tracker, a simple algorithm that run on top of any object detection algorithms output (such as YOLO, Detectron, OpenCV face recognition ...etc ) to track objects persistently across multiple frames.

It was built for the need of two projects:

The goal of the post is to provide some context on how the tracker works, so you are able to fork and improve it to your use-case.

YOLO (or other object detection algorithms) gives us a list of detections for each frame, but doesn’t assign an unique identifier to those detections. This means that on the next frame you do not know if this red car is the same:

What we were looking is to enrich the YOLO detections with an unique id for each object that would track them across the scene.
YOLO input

We first implemented an intuitive algorithm [inspired by Daniel Shiffman post] which works this way:

We immediately saw that one of the challenge would be to define the doesMatchExistingTrackedObject()function that compare two detections, how to determine if they are tracking the same object ?

This leads to write a distance() function, which compare two detections positions (current detections and candidate for next frame) and determine their relative distance. If they are considered close enough, we can match them. (we used the center of the bbox to compute this distance)

This early implementation was already pretty good and matching correctly ~80% of the detections, but still had lots of re-assignments (when we lose track of the object and we assign it a new id even if it is the same object).

At that point we had some ideas on how to improve it:

We first integrated the idea of keeping in memory the unmatched items for a few frames which is simply wait a few frames before removing it from the tracked items.

This made the tracker more resilient to missing detections from YOLO and avoided some reassignments, but in order to have it more effective, we needed also to predict the next position.

The idea behind this to be able to predict the next position of the tracked object if it is missing in the next frame, so it moves to its “theorical” position and will be more likely to be re-matched on the next frame.

At this point we didn’t have much clue on how to improve it, we felt the need to review some computer vision literature about tracking to make sure we were not missing some good ideas.

We found some useful papers for our problem statement. Check them out here:

And for each of them, there is two possibilities:

We noticed that the real time algorithms use only the detections inputs (done by YOLO for ex), versus the non real time trackers use information from the image frames to get more data to do the tracking. Also most of the papers and projects published are focusing on single object tracking and not MOT.

Historically there was almost no algorithm working only on the detections output only as the detections weren't as good / fast as the recent progress of neural network based detector such as YOLO, and they needed to get more data from the image frame to do their job. But now this is changing and the tracking algorithms get simpler and faster as the detections are better. This technique is also called doing "tracking by detections".

Quote of the SORT deep paper:

“Due to recent progress in object detection, tracking-by-detection has become the leading paradigm in multiple object tracking.”

That said there are maybe tracking approaches using image data that lead to better tracking results than just "tracking by detections" , but we haven’t looked into them as they will be more complex to run and may likely not run in real time: for example color based tracking, particle tracking ...

For each of our application, we had different needs

We decided to focus on real-time tracking only as if it works with realtime tracking it will works on a pre-recorded video ... (we kept in mind that for the game app we have the option of using non real time tracking algorithms)

Also our problem is simplified because we mainly track cars, and we have a fixed camera viewpoint.

A challenge exists for researcher to compare their tracking algorithm, and it is specifically designed for Multiple object tracking: https://motchallenge.net/

There are plenty of algorithm, but we benchmarked two of them that had the following criterias:

SORT : Simple Online and Realtime Tracking : https://motchallenge.net/tracker/SORT is based on that paper: http://arxiv.org/abs/1602.00763

Python implementation, Licence GPL-3.0 : https://github.com/abewley/sort
Fast but no super fast: 100 FPS on a macbook pro 2012 , and may eat some resources needed on the jetson for the open tra

How does it work ?

The basis of the algorithm is the same as ours, it compares a frame with the next using dimensions like position of the bbox, size of the bbox and compute a velocity vector. It does have novelties compared to our approach:

We also found some limitations during the exploration of this approach:

How does it perform on our use case of tracking cars ?

Out of the box not that great. The main problem being that there is high number of identity switches (as it does not handle re-entering). But it does perform better for some cases where our tracker is losing tracking.

Also, and this is true for all trackers of the MOT benchmark, the are optimized for persons, not cars, we didn't try with persons as we didn't shoot footage of persons yet, but we can hope that it performs way better than our algorithm for this.

Takeaway from the SORT algorithm

Even if we were a bit disappointed with the raw results after playing a bit with it (changing some parameters), we could take away some ideas that would help improve our algorithm, like integrating the Kalman Filters to make better predictions.

We also started to notice that the algorithms from the MOT challenge were optimized for persons, and might now work as well with our use case of cars.

NOTE: some improvement has been made on SORT with https://github.com/nwojke/deep_sort , which using deep learning with a model trained on pedestrian to handle the occlusions scenario / re-entering. We didn't test it but it says that it should run in Realtime also.

How does it work ?

It's incredibly simple, it works by comparing the overlapping areas between the two detections between the frames.

It does this by computing the intersection over union or the areas:

And it does just that (no prediction, no velocity vector computation...)

How does it perform on our use case of tracking cars ?

Surprisingly great ! We think out of the box it may not be as good as our current algorithm tracker for some case because YOLO is missing detections quite a lot of times and triggers lots of re-assignments with this tracker... but it had a huge potential of improvement if we add prediction + re-entering features.

Takeaways from the IOU tracker

A quote from the paper that summarize it well.

Based on what we learned we revisited our distance() function. It could be improved by using this overlapping area comparison.

Based on the previous learning, we simply integrated to the tracker the distance() function of the IOU paper instead of reasoning on euclidean distances, this led to lots of improvements and making the tracker much more reliable.

We also found out that with some objects like trucks, yolo sometimes make double detections for the same objects, we fixed that by no necessarily assigning all the detections to tracked items, this avoided some id-reassignment as well.

E. Limitation and ideas for improvement

Some limitation of node-moving-things-tracker is that it was mostly tested on tracking cars, and could be over optimized for this use case and perform badly on other use cases. Also it was only tested on fixed camera viewpoint.

To improve it further, it could be a good idea to work on the prediction framework, by integrating Kalman filters, and also integrate the confidence on the detection given by YOLO which isn’t used at the moment.

Another path for improvement would be to use some machine learning techniques to learn from a fast variety of traffic footage, the only thing that would be time consuming is to produce a large enough training set.

We didn’t take the time to improve the tracker further as it was good enough for our use case, but there is plenty of room to do so.

In this post we simply wanted to share our learning process on tracking things, and we hope it gives you enough context to be able to fork the project and customize it for you use case.

How to Sproute your navigation

Walk Me Through Your Phone

making of: Flights to Rome

What are you looking for?

If you want to stay informed, subscribe to our non regular newsletter.

Thanks for the fun ride and see you soon. ❤

Got it!
We use 🍪🍪🍪 to optimise the design of our websites. By continuing your visit on the website, you consent to the use of cookies 🍪. Got it!